What impact do raids have on children and youth?

Research consistently shows that immigration enforcement actions have a harmful impact on the health, safety, academic performance and overall well-being of children, including U.S. citizen children living in mixed-status families. According to a 2010 report by the Urban Institute, children who witnessed parents or family members apprehended in a home raid were much more likely to experience symptoms of post-traumatic stress disorder than children whose parents were arrested in other settings, including greater changes in sleeping and eating patterns and much higher degrees of fear and anxiety. Several teachers in North Carolina also reported significant behavioral changes and increased absenteeism among students following a local community raid, including among U.S. citizen students.

Are there places where raids are prohibited?

Yes, with exceptions. According to a policy memorandum released by the Immigration and Customs Enforcement (ICE) agency in 2011, commonly referred to as the “sensitive locations memo,” ICE officers and agents are to refrain from enforcement actions at least at the following locations and events:

Is there a federal law that prevents schools from sharing student information?

Yes. Under the Family Educational Rights and Privacy Act (FERPA), schools are prohibited, without parental consent, from providing information from a student’s file to federal immigration agents if the information would potentially expose a student’s immigration status. If ICE agents present a school with a removal warrant (deportation order), the school is still permitted to refrain from providing student information, as the warrant is administrative, not judicial. Under FERPA, schools may disclose directory information without consent, but they are required to allow parents and eligible students a reasonable amount of time to request that the school not disclose directory information about them. Some schools [and the Southern Poverty Law Center] have also interpreted the Plyler decision as prohibiting them from requiring students to provide Social Security cards or birth certificates as a condition of enrollment, test taking or participation in school activities. For more on FERPA, see familypolicy.ed.gov.

What Educators, School Support Staff and Communities Can Do

Taking Action Beyond The Classroom

Advocate to stop raids and halt deportation proceedings. Unaccompanied children and youth should be in school, not in detention centers awaiting deportation. Educators can play an important role in protesting raids and halting deportation proceedings. For example, if a student has been detained by ICE, you can send a letter of inquiry to the U.S. Department of Homeland Security, asking for prosecutorial discretion to be exercised or considered, or you can file a formal civil rights complaint with the U.S. Department of Education’s Office for Civil Rights.

You can also distribute the United We Dream deportation defense guide, which was published to inform members of Congress and other elected officials about the role they can play in stopping the deportation of their constituents and other community members. 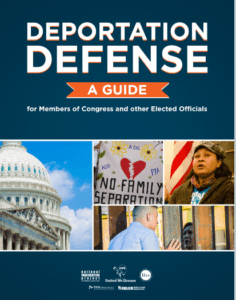 Elected officials have successfully advocated for individuals in removal proceedings for years and continue to employ this process to help immigrant communities even today. The guide is also a useful resource for community advocates and people in deportation proceedings seeking support from their elected officials. Download the guide here.

Adopt resolutions. School districts are responsible for ensuring the safety and well-being of all their students while they are in school. One way to create a welcoming school environment and protect undocumented students while in class and on school grounds is to pass a resolution that restricts ICE agents’ access to school property, similar to the one the Los Angeles Unified School District (LAUSD) passed in February 2016. The LAUSD resolution:

Please let us know if you have any questions, comments or additional information.